Question: What do the Spitfire, Concorde and the tube map have in common?
Answer: They were voted as Britain’s top three iconic designs of the twentieth century.

Henry Charles Beck was born on 4th June 1902 at 14 Wesley Road in Leyton. In 1936 he moved to Finchley at 60, Courthouse Road in West Finchley where he lived until 1960. It is now marked with a plaque placed by The Finchley Society in 2003. Beck worked as an Engineering Draughtsman for London Underground Signals.

His colleague Fred Stingemore was having difficulty with squeezing in newly built stations and lines on to the existing London Underground map and so Harry, in his spare time jotted ideas and came up with a topological representation of the lines and stations. The earlier maps had all used geographic layouts, with linear maps for each line displayed in the relevant Underground train carriages.

Beck’s map consisted only of vertical, horizontal and 45º diagonal lines, with the only landmark being the River Thames which was also represented topologically. The crowded central area was enlarged while the outlying lines and stations were condensed. Interchanges on lines, which Beck considered was far more important to passengers than geographical location were marked with diamond shapes while other stations were marked by ticks. 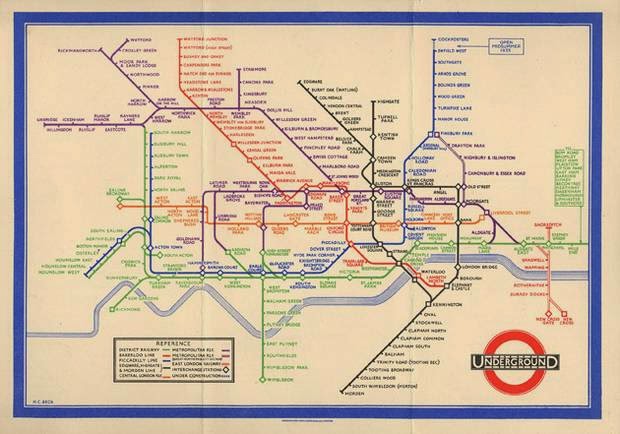 He submitted his idea to Frank Pick of London Underground in 1931 but Pick considered the concept too radical and criticized it for not giving any idea of the distances between stations. Beck argued that when travelling underground this wasn’t necessary.

In spite of Pick’s objections Beck’s idea was put on trial in a pamphlet given to passengers in 1933 with an explanation: “A new design for an old map. We should welcome your comments.” The comments must have been favourable because it became an instant hit with London’s travelling population. The initial batch of 700,000 was reprinted after the first month in use. Beck was paid the princely sum of 5 guineas for his work which was equivalent to about two week’s wages. From then on Harry Beck produced many versions, updating it for London Underground until 1960. There was just one exception when Hans Scheger produced a version in 1939, which proved unpopular. Beck also designed posters for the Underground in 1932-3 including one advertising What’s On in London, one for rambling in the Chess Valley and one promoting cheap return fares.

When the London underground network was built it was developed as a number of lines built and managed by independent companies. Each line had its own route map but there was no cohesive map of all the lines. They were standard geographical maps, many of which also indicated roads. The first combined map was produced in 1908 for the Underground Electric Railways Company of London (UERL) along with four other companies.

Finchley Central station was built by the Edgware Highgate and London Railway and opened on 22nd August 1867 when it was called Finchley & Hendon. By the time the station opened the line was run by Great Northern Railway and was on a line that ran from Finsbury Park to Edgware via Highgate. A branch line from Finchley & Hendon to Barnet was constructed by GNR in 1872. The station was renamed Finchley Church End in 1894.

When Harry Beck drew his first Underground map the last station on what we now know as the Barnet branch of the Northern Line was Highgate. The Barnet branch line was incorporated into the London Underground in 1940 as part of a partially abandoned project called Northern Heights which began in the 30s. Finchley Church End station was renamed Finchley Central on 1st April 1940 and the first electric train passed through it on April 14th.

The Northern Heights plans to link Mill Hill East to Edgware and extend to Bushey were dropped in the 50s when the land became part of the protected greenbelt, with the projected funding diverted to update the Central line. The existing branch line from Highgate to Alexandra Palace and the link from Highgate to Finsbury Park were closed to passenger trains in 1954.

These developments required regular updates on the Underground map and although Beck took a position teaching typographics and colour design at the London School of Printing and Kindred trades in 1947, he continued work officially on updating the map until 1960. There were numerous versions including an unused one for the 1948 London Olympics. He not only had to add stations and lines, but redesigned the symbols for stations and interchanges, as well as changing colours for the lines. The original diamond shaped interchanges were changed to circles and the lines became the colours we know today. The Central line went from orange to red, while the Bakerloo went from red to brown. Beck’s final 1960 version is very similar to the one we use today.

In 1960 Harold Hutchinson, the publicity officer for the Underground, designed his own version of the map, but it was cramped and parts were difficult to read so four years later the design was handed to Paul Garbutt. Harry Beck continued to made improvements on the map in his own time and submitted ideas until his death but his suggestions were ignored. Since then the London Underground map has continued to be changed with new lines, new stations and new symbols such as those indicating Disabled access. In September 2009 a major change was made by the removal of the River Thames! This resulted in a great deal of media attention and earned disapproval from many Londoners including Mayor Boris Johnson. The next version, in December 2009, put the Thames back!

Most other underground railway networks use topological maps yet the London Underground map is the most famous. It appears on postcards, T-shirts, mugs and dozens of other souvenirs. Last year it featured in a series of ten themed ‘Best of British Design’ stamps by Royal Mail along with the Spitfire, Concorde, the Routemaster bus, Penguin Books, the Mini and the mini-skirt. The map has also inspired art. David Booth’s 1986 poster 'The Tate Gallery by Tube' depicted the lines on the map as paint squeezed out of tubes. The following year Paul Middlewick produced 'Animals on the Underground' by drawing along lines to produce a series of animal diagrams.

Perhaps the best known is Simon Patterson’s 1992 'The Great Bear' which hangs in the Tate Modern. Here the names of the stations have been replaced by those of famous people with each line dedicated to a particular group: from saints to writers and philosophers, from sports people to scientists. The exception is the East London line, which bears the names of planets. The Northern Line boasts film actors. Finchley Central becomes Lauren Bacall and my local station is Michael Caine.

I like to think that Harry Beck enjoyed going to the cinema and would approve of his local line bearing the names of Hollywood legends. He died on 18th September 1974 in Southampton without being acknowledged as the designer of what would be voted as Britain’s second favourite icon of the twentieth century. Sadly, it wasn’t until the 1990s that he was officially recognised by London Underground as the man who literally put Finchley on the map.