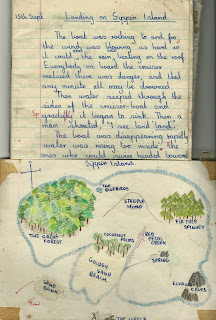 During a recent de-clutter, I came across my second, third and fourth novels. Unpublished, they have lain in the loft for many years. The reason why they are unpublished is because the writings of a 10, 12 and 15 year old tend not to be publishable! The first novel, written a year before this one, may still lurk in the attic. It was illustrated too, and received an excellent review from its only reader.

The second novel featured here was my first English project at secondary school. I began and completed it in the two weeks before my 11th birthday. At approximately 1,500 words calling it a novel might be stretching reality a little, but that was the task and the given subject was life on a desert island. 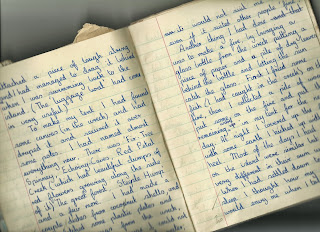 The third novel, written during my pony-mad phase, was about a girl in her first job at a riding stables and falling for one of the boys who also worked there. There was plenty of drama including a riding accident which in those far off days involved someone galloping off to phone the local doctor to attend the injured rider in a the middle of a moor. Now, of course, someone would just phone the air ambulance.

The fourth was an epistolary novel about a girl who went to work as a mother’s help in a large disorganized family and of course she falls for the oldest son. Inevitably there is a misunderstanding and she thinks he’s no longer likes her so goes out with a guy she’s known forever which makes the other one jealous! Containing a smattering of 15-year-old angst, it's riveting stuff.

After these crackers, it was a mere 45 years before I attempted the next one and that has taken a lot longer than 2 weeks. A lot longer. My writing has improved a little (although I think my hand-writing was better when I was 10) and I hope that it just might be publishable.

So all you novelists out there - when did you write your first masterpiece?

I stand by my last post about good grammar and spelling, but there are times when it doesn't matter at all - the message is what counts. 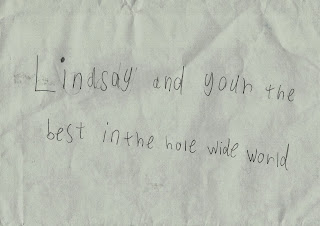 This note is from a little girl with significant language and literacy difficulties, who is mastering both and is revelling in her new found skills. We've read many stories together - I used to read to her, but now she reads to me and is beginning to write her own stories.

She has a world of literature awaiting her.