At the book chatters group at my local library, where we talk about and discuss books we have liked, or sometimes not liked, I mentioned that I'd recently enjoyed two books written by friends.

Then it struck me that I hadn't met either of them in person but only via the Internet. But writers groups are generally friendly places and are supportive of each other, enjoying each others' success so it feels as if members are, indeed, friends.

The important things though are the books in question. The first was Matthew S. Wilson's Once Upon A Camino. 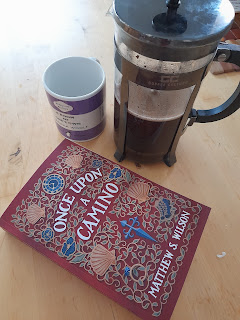 During the many Melbourne lockdowns during the first two years of Covid-19, writers came to together via Zoom courtesy of Writers Victoria and its host Noè Harsel twice a week. Participants wrote for 25 minutes. Some used Noè's prompts, others did their own thing. We didn't listen or critique each other's work but several of us would chat for a few minutes afterwards.

Matthew joined on as many Tuesdays and Fridays as he could to complete his novel and get it published.

I read it soon after it was published. I knew the protagonist, Tom, walked the Camino de Santiago, as Matthew had done some years before, and was doing it to prove his love for his girlfriend to her grandfather. I knew Tom lost his luggage at the beginning of the journey. What I didn't know was that my journey as a reader would be as unexpected as Tom found his walking adventure. I rate books by their un-put-down-ability and this was one I raced through to keep up with its narrative pace. Well worth the  read! 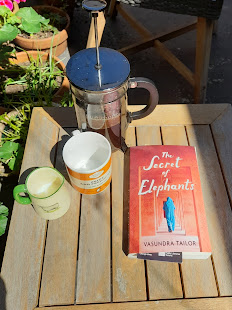 The second book wasn't entirely new to me as I had been a beta reader for Vasundra Tailor, a member of my former North London writing Group Greenacre Writers, although Vasundra joined after I had left. When I heard she was seeking readers for her manuscript set in India and Zimbabwe I couldn't resist as I love books set in different countries to my native UK.

I thoroughly enjoyed reading the manuscript and felt she definitely had a novel worthy of publication. But we all know the path to that doesn't always run smoothly so I was delighted when she announced she had a publishing contract and later, Vasundra kindly sent me a copy.

Reading The Secret of Elephants felt like meeting up with old friends. A family story spanning three generations and two countries, I enjoyed the re-read of this story of uncovering family secrets and finding courage. I'm thinking of suggesting a sequel!

Matthew S. Wilson @Matthew_SWilson  Once Upon A Camino