Once upon a time two writers decided to hold a literary festival...

It started as a half day event aimed at promoting the work of members of our writing group, Greenacre Writers. But we knew we had to have speakers with a bit more clout too and so FLF - then called Greenacre Writers Mini Lit Fest - was born in 2012.

We had such great feedback from participants as well as the audience we did it again the following year and included two writing workshops and an Open Mic event. Again, we had positive feedback from our invited authors. Indeed, two from the previous year were in our audience and speaker Alex Wheatle, aka The Brixton Bard, was pleased to be asked to join a panel discussion.

Alex joined us again for the following year in 2014 when we rebranded the event as Finchley Literary Festival. This was to give it an identifiable location and also reflected the participation of other members of the Finchley writing community. Alongside Alex, Emily Benet from the first festival also took part. We were getting something very right!

That year we managed to secure some funding from local sponsors and the festival expanded - 20 events in total. It was a great success, but whew, it was hard work. We vowed the following year would be smaller.

It was three events smaller. We had terrific authors and enthusiastic audiences. We were on a roll. Finchley shines at the end of May! Even if the sun doesn't.

This year owing to something very exciting, for which I needed to go hat shopping, we weren't going to be able to hold the festival in May. I wondered whether we could even give this year a miss. No, we couldn't. FLF is in demand. So we shunted it to the end of June. 24th to 26th June to be precise.

So what makes FLF different or special? Firstly there weren't many (or any) literary events going on in Finchley area so we filled a huge gap. Since FLF's inception, Barnet libraries have two weeks of special literary events in February and the Middlesex University lit fest is now held in nearby Hendon during March. But we were the first lit fest in the borough!

Secondly we aim to support and highlight local authors - from Finchley and nearby, and have found a number of very talented people within a short distance. Some have even included Finchley in their novels. Highgate and Hampstead, our near neighbours with a long literary tradition, need to keep on their toes. But of course we open our doors to authors from further afield too - just not ones who need to be flown in on Business Class!

Thirdly, we're not about focusing on big names, although we have nothing against them - and indeed did try to persuade one such writer by offering him chocolate but he was busy, or didn't like chocolate - but we do attract brilliant authors. Miriam Halahmy and C.J. Flood were both nominated for the Carnegie medal, and Alex Wheatle's first YA novel, Liccle Bit, was on the 2016 Carnegie long-list. Not something to be sniffed at. Tasha Kavanagh, who read last year, from Things We Have in Common is on the Desmond Elliot Prize long-list and was also shortlisted for the Not the Booker Prize (which in my opinion selects far better books than the other lot). Joanna Campbell who is speaking this year was also long-listed on NTB with her debut novel, Tying Down The Lion, (both in my top ten reads of 2015). A number of speakers' books have been listed for worthy prizes including Jemma Wayne who read last year.

Fourthly, FLF embraces diversity in all its gloriousness. I don't think we ever said 'oh let's invite diverse authors,' we simply open our doors to good writers who happen to be a pretty diverse bunch. This gives FLF a wide range of topics, ideas and viewpoints. I know my reading has broadened since reading our authors - and I aim to read something from each one. My pile of books grows ever larger during each festival. (Pity I can't claim new books and a bookcase from expenses but I am not an MP.)

I have read genres I hadn't been especially attracted to previously and have been wonderfully surprised (Mike Carey's Finchley zombies for example.) I've travelled to places and cultures I knew little about, which always excites me.

We're not forgetting future authors for whom there are two writing workshops and a Dragon's Pen - the first of which I was lucky enough to win two years ago. As a result, I have completed a major re-write of my novel! And even if you don't like reading, preferring the outdoors, there's a green walk - so good weather please! And to round it all off there's performance poetry and music in our favourite Finchley cafe, Cafe Buzz.

And that is what makes Finchley Literary Festival well worth a visit! Plus, we're really nice and there will be cake! 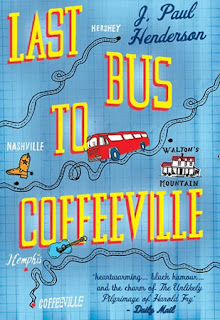 World Book Night is here again for its sixth year. I'm proud to say I've been a 'giver' for each of those years. But after all, what can be better than giving away books?

I've blogged about WBN before so I'm not going to say much here, except that this year I'm giving away Last Bus to Coffeeville by J. Paul Henderson. If you are interested, read more about it here.

Knowing my penchant for a good cup of strong freshly brewed coffee one of my colleagues laughed and said I'd picked the right book! She's not a great reader so she'll be having a copy thrust at her with orders to read it pronto! I think she'll like it and while it's lighthearted it is about serious matters.

I've never been to Coffeeville, and if I decide to add it to my travel destinations, I have a choice of four Coffeevilles; one each in Alabama, Arkansas, Mississippi and Texas. The one in the book is the Mississippi one. And yes, I did check I'd spelled that right. Now I have to go an see a man about a bus...