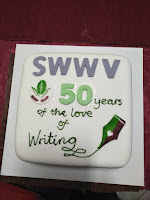 This past week, some of it in a snap lockdown, has seen me spending a lot of time on my sofa or in my garden chair (the temperature has been hitting 30 for the past few days.) I've watched a good number of sessions offered by The Society of Women Writers Victoria in their For The Love of Writing Festival, celebrating their fiftieth year. The opening day was to be in person at The Library at The Dock, which I was looking forward to attending but the lockdown meant that too had to be wholly online. As the event was being filmed for those who couldn't attend in person, the transition to online was seamless. Except we didn't get to sample the lovely celebration cake made by one of the members!

Fifty events provided plenty of choice from early morning exercises for writers who spend hours sitting at their computers to hints and tips on getting published, bi-lingual writers talking about writing in different languages and how this affects their work, writing for young people, writing poetry, memoir, illustrating books and of course plenty of author events.

There was even an online cookery lesson followed by a food writing (and eating) discussion.

I couldn't attend all the events but I will be able to catch up on some I missed as they were all filmed and links will be available for a short time to ticket holders.

For me the highlights included hearing keynote speaker Rosalie Ham talk about her writing, Kate Leeming's incredible cycling expeditions, from across Siberia, around Africa, around and into the interior of Australia and her plans to cross Antarctica.

I enjoyed the presentation by Madwomen, Bridgette Burton and Christina Costigan, who set up an independent theatre company, Baggage Productions, and I was fascinated by Sue Smethurst's talk, Why Truth is Stranger and Better than Fiction, about her non-fiction books including The Freedom Circus, the story of her husband's grandparents death-defying act to escape the Nazis and start a new life in Australia. 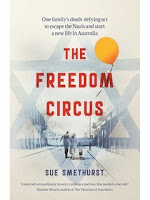 Pip Williams talking about The Dictionary of Lost Words, which I read last year and nominated as one of my top reads (along with thousands of other people I suspect) was fascinating. Pip told us how, as dyslexic child, using dictionaries was a nightmare for her! Now she owns a copy of the first volume of The Oxford English Dictionary minus the famous word - bondmaiden - which is the basis of her wonderful novel.
The talk with Lucinda Hawksley and doyenne of theatre and cinema, Miriam Margolyes, on Dickens' Women, both fictional and real, was informative and great fun with Miriam doing impromptu performances from her stage show of Sairey Gamp, Miss Havisham and Miss Wade. The audience was very disappointed to hear that Miriam would not be doing another live tour of Dickens' Women.
Susanna Fullerton, President of the Jane Austen Society of Australia, gave a pre-recorded lecture on Jane Austen which was full of interesting insights. I've studied Jane Austen and her works quite a bit but learned plenty of new information.

Jo Oliver's talk about her biography of artist, Jessie Trail, published last year was another highlight. She traced Jessie's life, career and travels from when she met artist, Tom Roberts, in Mentone, near where I live now, and also mentions when she visited him in Hampstead Garden Suburb, London, near where I used to live!

All in all, it's been a busy and stimulating week and even without the lockdown until Wednesday, I admit I wouldn't have wandered far from my sofa or garden chair!
See here for information about The Society of Women Writers Victoria