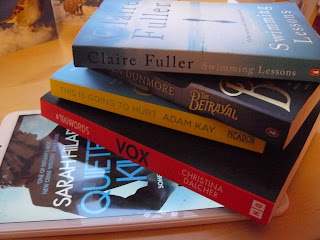 As in most years I've read around 56 books this year. But I'm finding it hard to come up with my top ten. Not because of too many contenders, as is usually the case, but too few. I don't wish to promote books that I haven't felt worthy, even if they were better than others. I read two books that have been praised on twitter and other social media among writers as well as readers and both proved very popular. Several people, whose opinions I find worthy, joined in with praise but I found them irritating and their main characters unconvincing. Clearly I am in a minority.

As always my reading has been a mixture of current books and older ones. Many of my choices this year have been books that have been sitting on my TBR bookshelf for ages and as part of my general de-clutter I got on with reading them rather than buying yet more new books. They have been a mixed bag. Some have now been donated to the local charity shops or our local community bookshelf which is thriving, but one or two have been retained. You can't de-clutter everything!

The following novels, however, do stand out.

VOX by Christina Dalcher - I had read many of Christina's flash fiction pieces and guessed this debut novel would be worth a read. I was right! A dysptopian vision which, while seemingly unreal, recent politics makes less unlikely!

The Betrayal by Helen Dunmore. One of the books on my TBR shelf, I'd not read any of Helen  Dunmore although two of her books were waiting for me. I read one earlier this year and was disappointed as I knew her to be a well loved and respected author. This book made me see why. I have The Siege awaiting!

Strangers On a Bridge by Louise Mangos. Another flash fictioneer whose work I have admired, this is Louise's debut. Much as I wanted to slap her main character at times, I was drawn into the story and kept turning the pages. Except I had to swipe the pages on my e-reader.

Bel Canto by Ann Patchett.  Another that had been on my TBR shelf for ages. Both gripping and delightful. I've lent it to a friend and am interested to see the recent film, which I learned about just after I read it.

Dirt Music by Tim Winton. A Christmas present from last year to celebrate my stay in Australia. I loved this and look forward to reading the two more books by Tim on my shelves, although one is on my shelf in Australia next to Dirt Music!

Quieter Than Killing by Sarah Hilary. One of my Kindle reads, it is the fourth of the D.I Marnie Rome series. Sarah never disappoints.

Swimming Lessons by Claire Fuller. I confess to hating most of the characters but this was a beautifully written book. I look forward to reading Bitter Orange.

My top non-fiction, although I'm hoping there might be a bit of fiction in there, is This Is Going to Hurt by Adam Kay. I'm a sucker for books by staff or former staff of the NHS, because whatever is said about the NHS, the fact is that most of these writers did their jobs because they loved working with their patients - as did I!

Family Stories That Make History but not History Books.

I am beginning preparations for a different Christmas this year - it will be the first that I've spend without my daughter since she was born! Last year I celebrated at her new home in Melbourne and I hoped to be there for this year too, but events have transpired to make it otherwise. It's particularly hard as this is my grand-daughter's first Christmas, although at three months old she won't be too worried. I will, however, be able to Skype to see her and her parents and wish them a very happy Christmas and for that I'm very grateful. Not everyone who is separated from family or friends has that luxury.

This time a hundred year ago my grandfather, who served during The Great War in the Army Service Corps, was still in the army and he and his unit were gradually making their way back in their lorries from the Middle East. Unfortunately my siblings and I know very little about his army life, although one sister recently found diaries online written in 1915 by our great-uncle by marriage, Captain Comley Hawkes, who also served in the Army Service Corps which gives us an inkling, although they worked in different locations. One story I recall my mother telling us is that Grandpa and his companions were given the opportunity of spending Christmas 1918 in Bethlehem. Much as he wished too, and I think partly regretted his decision later, he declined because he wanted to get back to England as soon as he could. He had a daughter of two and a half  years old waiting at home who he had yet to meet. I don't know exactly when he reached home but I know it was already 1919. He wouldn't get to spend a Christmas with her until her fourth.

As my sisters and I look more into our family history - we now have the names of  22 of our 32 great, great, great grandparents (made easier by the ancestry tracing websites) the information that we already knew was because of family stories, some passed from generation to generation and the fact that our parents and grandparents kept in touch with friends and family even though they they hadn't the benefit of instant communication as we do now.

Another family story is when my grandmother wrote to her friend, Gwen, who was then in Australia telling her that she had been jilted. The letter and its reply would have taken at least 12 weeks to travel across the world and back. I can message my daughter and receive a reply within as many seconds.

When she first went to Australia in 1913, at Gwen's suggestion, my grandmother worked for Gwen's  second cousins, that branch of the family having emigrated to Australia in 1851 (June 29th to be precise) during the Australian Goldrush. She later became good friends with their daughter Floss, who was a similar age to her, and when she married (Gwen's brother) her daughters were close friends with Floss's. When my grandparents returned to England letters and cards were exchanged between Australia and England. The next generation took over the correspondence which continued for over 80 years. Visits were also made and the connection continues hence I got to meet up again with my fourth cousin once removed on my visit to Australia last Christmas. My Australian born grand-daughter has dozens of distant cousins in Victoria, Australia because two of my mother's aunts also have numerous descendants there, several of whom are still in touch.

Family stories rarely make headlines but they are what makes history real. And I think they're important. I'm now of an age where I see toys that I played with in museums and the country childhood I experienced and wrote about here is now mostly history. I've mentioned previously my mother's notebooks (pictured above) of her jottings about that time and they have been a delight to read. I just wish we had more. Lets get our stories written for future generations, because history books won't tell them the stories that we can.