There are just three weeks until the fourth Finchley Literary Festival.

Each year the festival has been a bit different. Last year we had extra funding and sponsorship so we really pushed the boat out. This year's festival was intended to be a smaller affair. However, we all know that intentions don't always work out the way we expect, and so we have far more events than originally planned owing to the enthusiasm of members of our local writing community! A few events are popular repeats from last year but most are new.

There are workshops galore on all sorts of aspects of writing - designed for beginners and more experienced writers alike. They are about whetting the writing appetite and maybe encouraging participants to try writing in genres they don't usually tackle.

There are author events with fiction and non-fiction and even zombies, thanks to the star event with Mike Carey, author of The Girl With all the Gifts. Books about zombies aren't usually my thing, but this book is many cuts above what I suspect is the norm. A fascinating read even if, like me, zombies don't generally appeal! The festival also has music and performance poetry and literary walks - something for everyone.

There are lit fests everywhere these days so was another necessary? Rosie Canning and I thought there was and instigated Finchley's festival because there was very little going on in the arts world in our part of north London. Our near neighbours, Highgate and Hampstead, have a rich literary history and regular literary events but we felt our patch was distinctly lacking. When setting up FLF (originally Greenacre Writers Lit Fest) we discovered that Finchley has plenty of literary endeavour, past and present, and that Finchley is name checked in more than a few works of fiction including the aforementioned The Girl With All the Gifts!

Our first festival in 2012 was the first literary festival to be held in the borough of Barnet. We started a trend because Middlesex University's festival, which was originally at the Cat Hill site in Enfield, is now based at the Hendon campus in the borough and this year Barnet libraries had their own festival - a week of events with author readings and similar activities. We maintain, of course, that FLF is the best, focusing at least a couple of our events on literary talent local to Finchley.

For details of all events and workshop bookings see Finchley Literary Festival. Hope to see you at some of them.

As the fifth WBN approaches, I have just been to a nearby library to pick up 18 copies of After the Fall by Charity Norman.


It was at the same library where a few weeks ago I attended an author event, a talk given by a best-selling author of crime thrillers, who mentioned that she did not like WBN as she felt it devalued books. She pointed out that authors put in many hours of research, writing and editing before a book is published - which of course all those who have written, or tried to write, a book will know - and she felt this effort should not be undermined by giving books away for free. But on the point of devaluing books or their authors - I can’t agree with her that WBN’s aims devalue books.  I think, it enhances them.


Yes, thousands of books are given away, but the volunteers are asked to give wisely, not just to hand them out to their friends who fancy a freebie. We are asked to give them to people who need a bit of encouragement to read, to those who don’t regularly read for pleasure or own books. A couple of years ago I gave a WBN copy of The Book Thief  to a colleague who told me he rarely read fiction. He loved it, and continued to ask me to recommend books and I leant him several. He now reads and buys fiction.

I wrote once before about giving a WBN book to a client who was had serious depression and was not able to work. Living on a meagre income, her only pleasures were her two small dogs and reading. She was thrilled to be given a book that she could keep. ‘It’s the best thing that’s happened to me for ages,’ she said. It may not have changed her life but it changed her day, and hopefully a few more days as she read the book.


There is evidence that The WBN titles actually boost sales so authors gain too. I have certainly bought some titles as I felt that having been selected for WBN, they must be worth reading. I'm sure many other people have done the same.

I love the idea that I can help encourage people to develop a love of reading and am pleased to be part of WBN again this year. I hope the gift of a WBN book will 'make' a few more days for my recipients.
Posted by Lindsay at 20:04 3 comments: 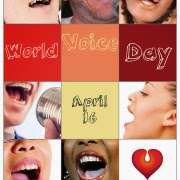 April 16th is World Voice Day. Nearly 400 WVD events are taking place around the world in 52 different countries in celebration of the human voice which, as the campaign points out, is the original social media.

I wrote a blog-post three years ago about how people who have voice problems can feel: here.

If you are not always confident about looking after and using your voice, my Voice Skills for Writers Workshop for Finchley Literary Festival on May 23rd might be just the thing for you.