Launch of paperback edition of Stories for Homes 2 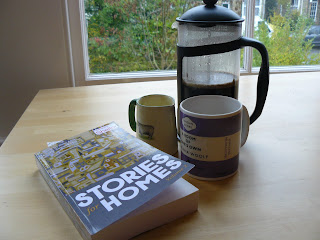 As winter approaches and grey days loom, there's nothing I like so much as settling down with a cup of coffee and a good book, grateful for a cosy home to call my own.

Stories for Homes 2 aims to help make that a possibility for those who don't have a home or whose homes are substandard, by supporting the charity, Shelter.

The 55 stories and poems in the anthology relate to the theme of 'home' but the concept is interpreted in many different ways, making this a collection with wide appeal.

As I mentioned in an earlier post, when the e-book version was launched, I am thrilled to have my story, The Importance of Shoelaces, in this collection. It sits alongside stories from many authors I admire and now I've had a chance to read, and in some cases re-read, all the stories, I feel even more honoured that mine was selected. I've also discovered new writers whose work I will follow. The writing styles are varied and the themes thought provoking, sad, funny and cosy in turn.

I remember way back when I was a child hearing the buzz about a shocking TV play called Cathy Come Home. It was shocking because it featured the issue of homelessness, and related problems which didn't get much of an airing in those days until Ken Loach came along. I didn't actually see the play until a few years later and I saw it again on it's fiftieth anniversary last year when it was shown on TV,  around the same time Loach's latest film I, Daniel Blake was also released. Sadly, homelessness has not improved in the intervening fifty years. Co-incidentally the charity Shelter was launched just a few days after Cathy Come Home was first aired, although the two were not linked.

Stories for Homes 2 will not only give you an interesting read but your purchase will enable Shelter to benefit as well. Win-win!

There are a number of live events to launch this collection into the world, including a slot at Rae Stoltenkamp's book launch, mentioned in the previous post on this blog, so do get to one if you can. See the details here. The anthology is also available to buy online here.

No Souvenirs, Sorry. A guest post from writer Rae Stoltenkamp.

Knowing my penchant for travel, Rae, who I met at my first writing class over ten years ago, has taken time off from her novel writing to pen a post about her travel ethos.

I love travelling. For me it’s all about experiencing the place I’m in: the food, people, scenery, vibe…  In a perfect world I’d go on holiday twice, even thrice a year. I’d go somewhere different every time, because how can I experience cultures of the world if I only stick to one place?  Admittedly, I’ve gone back to Italy time and again. A girl’s allowed her weaknesses.

My list of places to visit is as long as my books to-read pile is high.  For this situation I blame the international gang who make up my friendship group, and Bill Bryson.  To date my friends hale from Hong Kong, Poland, Canada, New Zealand, Australia, South Africa, France, Switzerland, USA, Brazil, Italy… I think you get the gist. So it stands to reason they want me to know the wonders of their own particular patch. And I confess, they don’t exactly have to twist my arm to make me want to visit.

But that Bill Bryson – he started me thinking about weekend jaunts as well as longer holidays. Him I totally blame for my now insatiable desire to hop over to places like Bruges, Vienna and Berlin for a quick taster.  As soon as the royalties from my self-publishing moves into regular double figures on a monthly basis, I know where I’ll be heading.

I don’t mind travelling alone as I write when I’m away and this can be a touch irritating to companions who are not writers. In recent years I’ve taken to travelling with my good friend Bev, also a writer so doesn’t mind my writerly ways. As we generally have similar interests it’s also great for shared excursions. As I get older I’ve found I want to do the shared holiday experience more and more. I like having someone to plan daily events with and if I go off to do something on my own, I can then come back to the holiday-let and narrate the day’s tales.

I usually post to my blog or Facebook page when travelling as this serves as a kind of travelogue. It’s become a pretty standard thing for me to do now. I often look back on these posts, reminisce and relive the best bits of the holiday. It takes armchair travelling to a whole other level.

The one downside of being self-employed is that I don’t get to travel as much as when I had a regular, stable income. So when I’m on the move I don’t want to be weighed down by a collection of souvenirs for friends and family. I want to spend the time taking photos of eye catching scenes, eating food never eaten before, visiting locations heard of or read about in books. I want to fully immerse myself in the experience rather than worrying I’ve not got the right pressie for Aunty B or searching round for the next souvenir shop.

Sometimes I buy an item of clothing or jewellery from the place I’ve visited so the next time I wear it I can remember where I got it and what I was doing at the time. I have a pair of black trousers I bought in Milan in 1996 which are still going strong. Chopsticks from the 100 Yen shop while visiting Japan in 2008 are regularly used when I make either Chinese or Thai food. These are the only souvenirs I’m interested in along with the copious photographs I take. So friends, family - no souvenirs. Sorry. 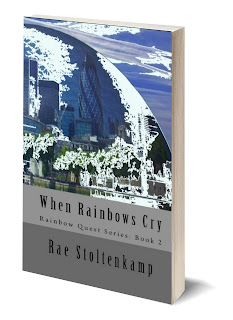 Rae publishes her new YA book When Rainbows Cry in early December, the second in the series following Where Rainbows Hide. For more information on Rae's novels take a look at her website.