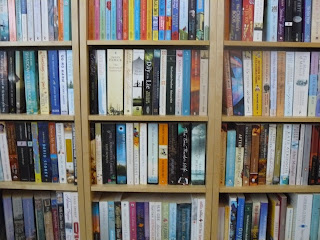 In November 1984 I decided, for a reason I no longer recall, to make a note of all the books I read. I wrote them down in a fat notebook along with a 1-5 star rating. Some were so good they got a 6. I also noted whether the book was my own, a library book or borrowed. By December 2012 I had to employ a new notebook. To date, I have read and recorded 2,000 books.

How I wish I had noted all those prior to November 1984, but two thousand books later I look back at my choices. They include fiction of course, plays, memoir, biographies, books of short stories and non-fiction including travel literature, but I left out textbooks relating to work or my degree.

Classics have featured throughout - from re-reads of Jane Austen and Thomas Hardy novels that I loved in my teen years to those new to me which I studied in the years I did a degree in Literature (for fun) which included Germinal, Middlemarch, and Fathers and Sons. I didn't record all the plays I studied including ten Shakespeare plays and some of Aphra Behn's, probably because I didn't read every singe word! I am nothing if not honest!

Can I remember all these books? Of course not. I often pick lighthearted books when I'm coping with a difficult patch in life as they provide not only a means of escape but add the rose-coloured tint that life sometimes needs. I may not always remember them but I enjoy them while I'm reading which makes them as valuable as those that are more memorable. One such, I can't recall which, was quite a fun read but I was shocked to find a passage in it which I'd read before. Was this blatant plagiarism? No, I was reading a book I'd read about four years previously but had remembered none of it except this particular amusing scene.

My reading style has changed - when younger I always persisted with a book, even if it was a 1-star, providing I'd got past the first chapter, but now I'll abandon it - at my age, life is too short to read something I don't enjoy or value. For that reason I - rather appropriately - abandoned The Days of Abandonment by Elena Ferrante. The book is not in my 2,000 count. I persisted for a while but I had no time for the main character, a vile woman who, in my view, deserved her abandonment. I also found the book unnecessarily crude to the point of vulgarity and I'm pretty sure reading to the end wouldn't have changed my mind! People rave about this author but so far I haven't attempted any others as this foray was so unpleasant.

My recent top reads, if you are curious, appear in my final blog of each year since 2012

Just leafing through my old notebook, which is falling to bits, I see 5 star ratings included Bill Bryson's Notes From a Small Island, Jonathan Smith's Summer in February (December 96) I didn't rate the subsequent film as 5 stars though, Amitav Ghosh's The Glass Palace (May 07), Michael Cunninghams's The Hours  (February 02) Alice Walker's The Color Purple, which was a re-read for my degree, and William Broderick's A Whispered Name (July 09). Jung Chang's Wild Swans, which I read in July 1998, earned 6 stars.

One noticeable difference is that my earlier reading included more library books than bought books (both new and second-hand.) I had less money to spend on books with a small child to look after when I started my log but I think this also reflects that in recent years there have been fewer books in my local library and especially fewer books suiting my taste than there used to be. On my last visit to the much depleted library since it was recently made much smaller, I could find nothing at all that I wanted to read. How sad. I think Waterstones' 3 for 2 offers (how I miss them) were also responsible for increased purchases in the later years. These days I attend more book events and invariably buy a book or two or three, so increasing my own book stock!

Bought or borrowed (but never stolen) here's to the next 2000 so I'd better get cracking to fit them all in.

How to Organize a Hen Party. (Or Not.)

A review for novel about a hen party. What do I know about them? My generation didn't go in for hen parties - or if they did, I was never invited to any when my contemporaries were getting married - so the first I attended was for a younger friend about 11 years ago. No pink sashes or plastic tiaras, it was a rather sophisticated three-parter with the 'hens' invited to join any or all parts. I attended only the evening do with a lovely meal and an amazing selection of cocktails. It was all very decorous and wouldn't have made a very interesting novel. The backstory was romantic though. The bride's journey to her marriage involved a meeting of minds on her travels in her late 30s with subsequent meetings at locations between Australia and UK with Barcelona being the decision spot! She went to live in Australia with her new partner but her wedding was here in UK at the church her parents and grandparents had married in. A smiling, radiant bride-to-be, she said 'I never thought this was going to happen for me.'

The second hen party I went to was my daughter's. Her romance also involved a meeting on a holiday, romantic meetings at places between Australia and UK (Bali was the decision spot). It was he who travelled to UK, where after a couple of years they got married and now they too live in Australia. Her hen party was a three-parter too, with an afternoon visit to the cat cafe, complete with moggies, for tea, followed by cocktails. At this point I left the youngsters who set off for an evening of cabaret. I believe there was a plastic tiara and far too many cocktails, but no sashes or willy wands, so not very novelistic either.

That's my entire experience unless you count the group I encountered early one afternoon, where several girls, already several sheets to the wind, were tottering around in very high heels and very short skirts plus plenty of party paraphernalia. I was in the middle of Emily Benet's latest book, The Hen Party  at the time. That party too is brimming over with bride-to-be sashes, tiaras, willy wands, bottles of bubbly and far more. What's more, it's being filmed for a reality show.

I reviewed it for Greenacre Writers: The Hen Party

Emily's trademark bouncy narrative is a great holiday read and if you thought Mallorca began and ended with Magaluf and all that implies, you might be in for a surprise. But in case you're not having a holiday this year, read it anyway.