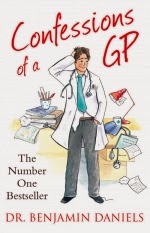 Last year several people gave them away in the local bookshop. I'm not quite sure that's what the organisers had in mind.