The Joy and Disappointment of a Short-listing. 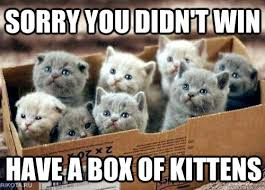 I often enter a monthly competition, mentioned here which I understand usually attracts over a thousand entries. There is one winner who receives a cash prize, a few shortlisted entries whose stories are published online and a list of long-listers. There is no published longlist followed by the shortlist, followed by the winner; it's all announced on the same day. (Presumably the winner is notified individually.) In the nineteen times I've entered I have been longlisted twice. That felt pretty good. I was not expecting to get anywhere so those two listings were a nice surprise.

But when I make a long-list with the short-list to be announced in a few days or weeks, I can't help feeling a smidgeon of hope that my entry will inch further up the ranks. Sometimes it does, sometimes not. But once I've hit a short-list that hope - which realistically should slide down because after all, only three will be placed - sneaks up a bit higher. Maybe, just maybe, I'll make the top three. Or even, could I even dare to think it, I might win.

I hate that feeling of anticipation. Even though I tell myself not to get my hopes up, some tiny hope insists on lurking. Then of course it's usually dashed. Although one time when I did win a competition, I didn't even spot my name on the winning list and it wasn't until I opened my individual email from the organiser that I realized I'd won!

But a short-listing isn't bad going. In the last year I've made four shortlists. One went on to be Highly Commended.

My most recent short-listing was with my second novel (the first remains unpublished) which I entered into the Hawkeye Publishing Manuscript Prize. This novel was started many years ago and was put away in my computer's 'Out of Sight Because It's Terrible' drawer after receiving some feedback from a peer critiquer that was so negative I lost faith in it. I wrote a post about it here. It came at a time that was difficult and I didn't have the energy to lick my wounds and get on with saying 'I don't have to listen to your opinions.'

I eventually picked the MS up and carried on faffing about with it but it was the Melbourne lockdown that made me really get on and complete it. I entered it into the competition. I will be receiving some feedback on it which I am looking forward to but also slightly dreading.

But this little success has given me to believe that my MS isn't a complete waste of time. That although I know I like it, that others might like reading it too. That it has some merit and that I must polish it a little more and attempt to get it out into the wide world again. Whether I succeed or not is another matter.

Anyway, time to move on and get ready to welcome the box of kittens. If they'd consider bringing some chocolate with them, that would go down very well indeed.

I read the beginnings of your novel and loved it. I wish you much success.

Thank you Rosie. You were one of the reasons why I didn't give up on it altogether.

Well done on the short-listing! I too scroll those monthly FF lists looking for my name 😂 Dragging out the wait is like the drum roll at the end of those talent shows... the anticipation is awful. You *should* be rightly proud of your placement with your novel, and I wish you all the best with it moving forward! :)

Thanks Emma. And here's to both our names on the next FF list!

I know what you mean – sometimes we can't help getting our hopes up and then if we don't win it somehow feels a bigger disappointment than if we'd come nowhere at all.

A shortlisting IS great though. You should be proud.