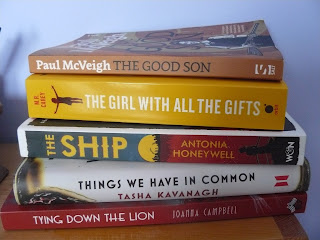 Also shortlisted for Not The Booker Prize, I'd read about Paul's debut novel on his blog as well as number of terrific reviews. I was attending the NTB event at Big Green Bookshop, so intended to buy a copy. After hearing Paul read an extract I was well and truly hooked. An original and authentic voice that took me there, to Belfast in the 80s, spending a troubled summer with Mickey - wanting him so very much to achieve what he hoped for.
Posted by Lindsay at 10:45

I have some of those waiting to be read, but not actually read any of them yet.

Glad you mentioned A Handmaid's Tale. I read it many years ago and loved it. In fact I'd quite like to read it again. From your list, I'm going to read Still Alice - although it will be a heartbreaking read, I'm sure.

Another excellent list of top reads, I must read Still Alice, I know I will eventually, it's good to be reminded of titles that have passed but endured.

I loved The Memory of Love, I think Aminatta Forna is a great writer with a unique voice, I enjoyed her recent novel The Hired Man as well and must read her memoir.

Have a great reading and writing year in 2016!

Thank you for all your comments and especially Claire, for all the books you recommend on your blog. So many books to read....