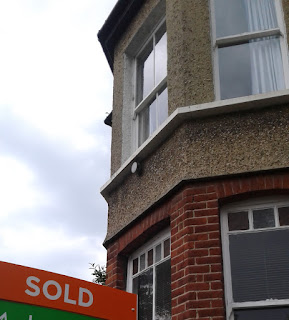 This post isn't writing related, it's about moving house. I can honestly say that I've not experienced so much stress as in the past few weeks! For the last year I have been gearing up to this point. I started over a year ago by getting my flat in North London ready to put on the market - remember all those mentions of massive clear outs and re-homing loads and loads of books?

After several let downs from potential buyers (including one who after putting in an offer lower than the asking price then demanded I reduce it by another 35K) at long last I had another buyer and the real packing began. Still more things to be sent to the charity shop. Was I really going to read this book again? No - off it went. What about this one? Yes! Into the packing box. I had twelve book cartons, plus more for stationery and photo albums, (yes, I still have many pre-digital photos in albums.) And yes, Marie Kondo fans, I do need more than one pen pot.

Skip this next paragraph if you hate rantiness. You (rightly) think Brexit is a nightmare? I had my own personal Flexit (aka Exit from Flat.) The only difference was here I wanted to leave. I can't adequately express the massive stress that the conveyancer who acted for my buyers in place of a proper solicitor caused me, my solicitor and estate agent through their sheer incompetency and idiocy. The questions they asked again and again although they had been answered in detail several times previously. The glacial pace they worked at, the mistakes...  In a weird mirror of the nonsense the country was going through, so was I on a micro scale. We were even aiming to exchange on 29th March! The buyers themselves then delayed the process by announcing they didn't have the deposit. It was a very uncomfortable time when I was at the mercy of other people. To pull out, which I seriously considered, was not really in my interests. Then the deposit was sorted out but another potential exchange date was delayed. And another. And then on the day of the 'definite' exchange, which was going to be followed by a quick completion, the conveyancer put yet another enormous spanner in the works because of something she had forgotten to put in the buyers' contract - or more accurately - did not realise she needed to put in the contact in spite of my solicitor having advised her to do so. See what I mean by stupid? And of course it was the day before she went on a week's leave. But somehow we got there.

So goodbye to my quirky flat in North Finchley, which has been my home for over 25 years. It now has a literary past having not only housed thousands of my books, hosted writing groups and literary festival meetings, it has also seen me complete a degree in literature and try to write my flash fiction, short stories and two novels. Blue plaque one day?

I very much doubt it because throughout these last few months my writing more or less disappeared from view. I did make some subs with both reworked stories and some new pieces but when things became really stressful, I could barely put two words together on paper or screen. And the subs, including several for which I had high hopes, resulted in rejection after rejection and not a single appearance on comp longlists. It seemed that nothing would go right and I began to feel that I should give up writing altogether apart from jotting long lists entitled Presents to Leave for House Buyers who Mess You About to alleviate my frustration! (No people or flats were harmed in the making of these lists.)

So what now? Am I settled in my new house? No, that's still on the horizon because I have relocated to Australia (Melbourne) and am currently staying with my daughter, son-in-law and grand-daughter. Not forgetting Pounce, the cat. My possessions, including all those book boxes are somewhere on the ocean (I hope not in the ocean - as people have kindly informed me that loads of containers fall off ships) and I am living out of suitcases. But I have all that really matters to me around me as I write. Let's hope my future Australian writing is a little more sucessful.

What a nightmare time you've had, hopefully all behind you now. Best wishes for your future in Melbourne, I'm sure once you have settled in and relaxed the words will flow into wonderful stories. Happy days ahead xx

Exciting times. Looking forward to reading about your adventures.

I hope you enjoy your new life x

I hope you'll be really happy in your new home and the stress of moving will soon be a distant memory.