Every Family Has a Story 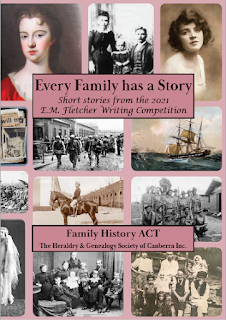 My story of my grandmother was included in this publication from Family History ACT. The 110 stories it contains are from those entered into their 2021 competition.

The book is full of fascinating narratives about ordinary - and sometimes extraordinary - people whose lives have not made headlines or been included in standard historical records but greatly add to our understanding of the past.

I wrote my story as I believe such accounts are important to those who come after - so much gets lost through verbal retellings as I have mentioned on this blog before.

There is no doubt that researching our ancestors' lives has been made much easier by the online websites such as Ancestry. One of my sisters did a great deal of research that has added to our family story, and has partially resolved one mystery. But as some  questions are answered, new questions arise.

Accessing some of the public family trees featuring various of my ancestors also shows that there are many mistakes made by other researchers, muddling names, dates and so on. Some errors have no doubt arisen because deciphering the handwritten records is difficult, others because of families tending to use the same forenames - sometimes a child born after a sibling has died was given the same name. The spelling by recording clerks was often inaccurate too. Family legend had it that my great-aunt was named Lilian Lucy Helen but the person who registered her birth was not very articulate and the clerk wrote Ellen instead of Helen. Records confirm this!

But research is fascinating and my own dabbling on sites such as Ancestry and Trove digitalised newspapers has given me some small gems which I've added to our family archive. It also pointed to more of my great-great-grandmother's family members emigrating to Australia in the nineteenth century than we previously knew about. I wish I knew their stories too.