The Finchley Lit fest was a huge success  -  the twenty events had good attendance and brought not only local people together but attracted people from further afield too.

I wasn't able to attend all the events, partly because I was working in the mornings, but I managed to get to as many as I could. For info about the first event see Rosie's blog Cli-Fi workshop

The first I attended was Anna Meryt's Poetry and Music Palooza. Apart from helping with a bit of furniture removal, I was simply a member of the audience and settled in with a lovely cup of Café Buzz coffee to enjoy the performances from musicians and performance poets. I wasn't disappointed and the informal café atmosphere added to the enjoyment. Rosie's blog has pictures here Poetry and Music Palooza and for a video see Highgate Poets' blog.

The next afternoon I was back, this time as an organiser. While a helper and I carefully re-arranged some furniture - around diners who were enjoying lunch, we had a break until the microphone and amp arrived. I'd just sat down when I recognized Sal Page, our first prize winner, coming in. She'd travelled from Morecambe, staying the previous night in Coventry. While she'd visited London on a number of occasions this was, unsurprisingly, her first visit to Finchley! I greeted her and as we chatted I felt as if I'd known her for ages - mainly through Twitter and Facebook. Soon Rosie, fellow GW anthology editor, arrived followed by Mike with the equipment and with a bit more hustle and bustle we were ready. Sal opened with her prize-winning story 'Flapjack' and was followed by Andy Byrne a runner up, who travelled a little less far from neighbouring Muswell Hill with 'Authors In Residence,' as well as Greenacre Writers who read from their stories, making a varied programme. Everybody made sure they ended on something of a cliff-hangar to encourage listeners to buy the anthology.
On Tuesday Rosie and I made a quick visit to Waterstones to see how the three YA authors, Miriam Halahmy , Gina Blaxill and Lil Chase were getting on. I helped blow up a few balloons and Rosie went in search of families to suggest they pop in to see what was going on. The authors had organised a quiz for young people with prizes as well giveaways and it was soon proving very popular. 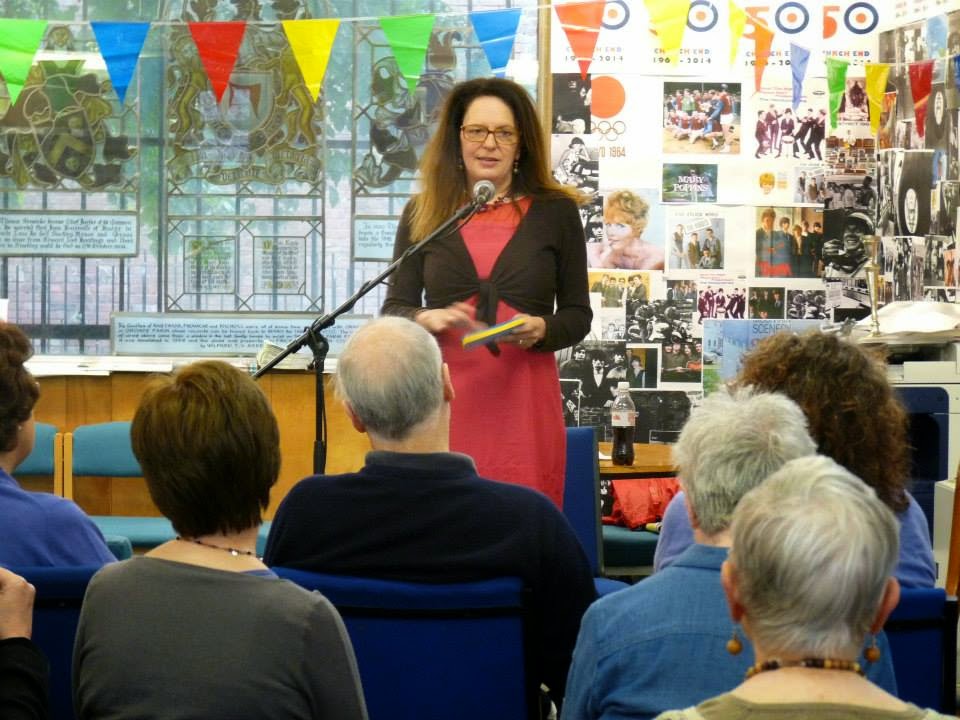 The next event was Bettina von Cossel's talk on crime writing. Not only was Bettina an excellent speaker, she'd brought props to enliven the talk. She donned the highest of high heels to demonstrate how one could 'accidentally' totter into an unwanted husband at the top of an escalator but if that failed, instructed us to get our characters to don trainers and try the same ruse on top of the cliffs at Eastbourne. The talk was 'How to Kill Your Darlings' and we were getting some useful tips! A recipe that might be useful was minced daffodil bulbs mixed with onion.

Bettina showed us her famous chair in which she found an ancient blood-stained knife - the knife was not on display but she used a  cardboard knife to graphically demonstrate a throat cutting! The victim was her son and I'm pleased to say no sons were harmed in the process. The point, of course, was how accuracy is all important to make crime writing believable. Research is key!  It was a highly entertaining and informative talk.