While Emily Benet was getting ready to greet the participants for her famous Social Media workshop, and several others were preparing the room for the festival's main event, I was in Waitrose shopping for speakers' gifts and lunch for the host of busy people who were making this festival happen. I filled my shopping bag, accompanied by one of Waitrose's staff who totted up my items and then waved me off, wishing me luck, without a single credit card or cash payment being made! I am not a shoplifter, but was taking advantage of the generous donation by Waitrose towards our festival. 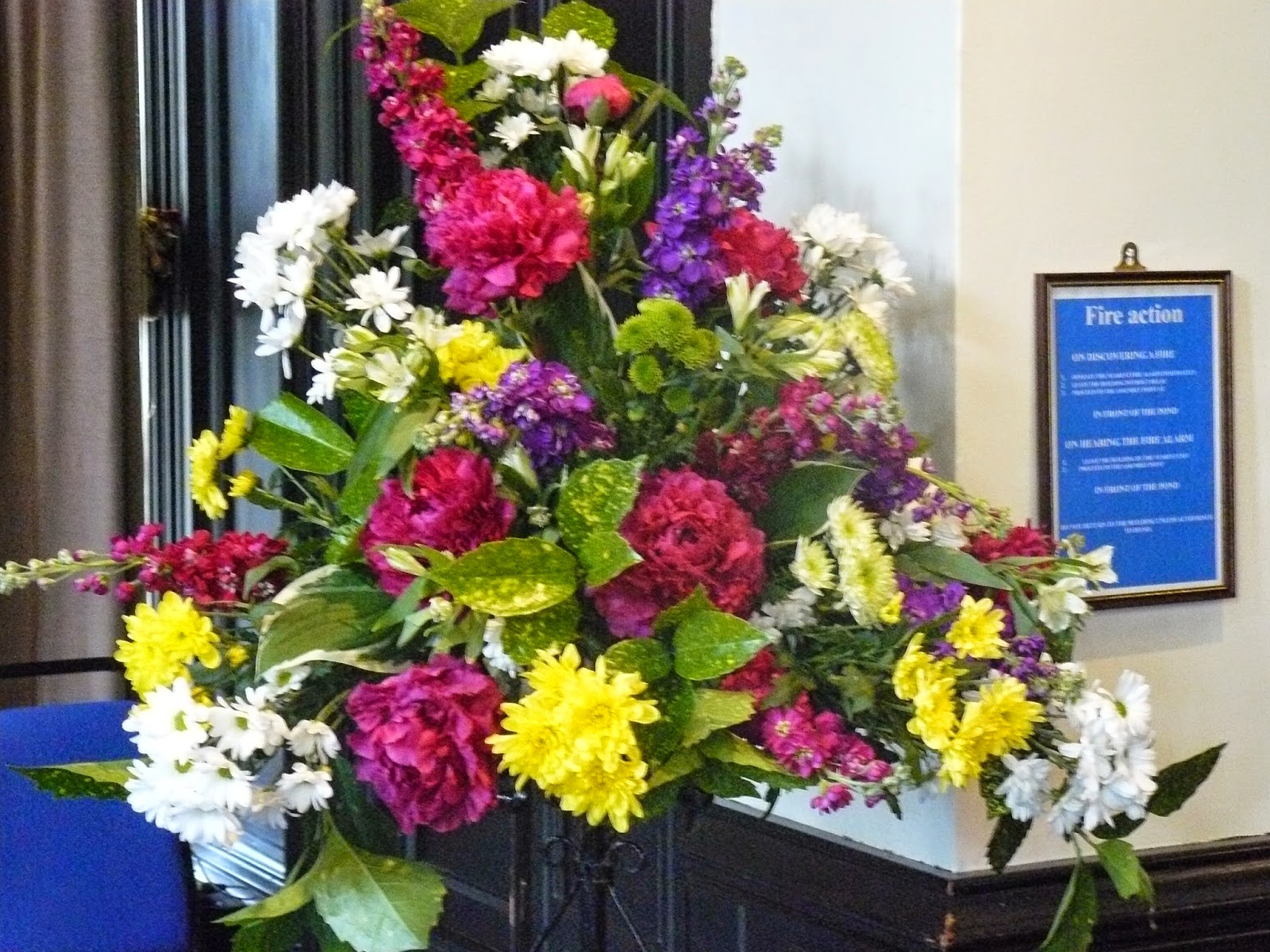 When I arrived at Stephens House and Gardens the main room was set out and was being decorated with a beautiful floral display by Elisabeth while Mike and Robert were hanging the banner and putting posters all round the room. I helped out here and there and Rosie and I had a quick conference to make sure we each knew who was introducing whom and checked the timings as I'd printed the first set of timings rather than the slightly altered second set!
﻿﻿
The sun was shining so I carried the picnic lunch out to the garden and set it out on one of the tables. The grounds were inviting but there wasn't time for an after lunch  stroll as we wanted to be ready to greet our speakers and guests.

Coming back in to the room, it looked marvellous. I remembered back when Rosie Canning and I held the first Greenacre Writers Mini Lit Fest two years ago saying to each other wouldn't it be wonderful to hold the lit fest in the home of Inky Stephens - Finchley's famous manufacturer of the ink that so many of us used in our schooldays. And two years on, here we were!

Soon our speakers had all arrived and the room was filling up and we were off. Rosie introduced our first speaker, Caitlin Davies. Her book The Ghost of Lily Painter was of great interest to the Finchleyites in the audience as it uncovers the story of two real women living in East Finchley who were baby farmers and were hanged in Holloway Prison in 1903. Caitlin told us how she got the idea to write this story and about some of her research.

I was pleased to welcome Alex Wheatle back to Finchley. He has supported the previous festivals, speaking at the first and appearing on the panel last year. Alex focused on his novel, Island Songs, set mostly in Jamaica. As well as visiting Jamaica himself, he based much of the book on stories his mother told him about growing up there.

Alex's talk was followed by readings from members of Greenacre Writers: Rosie Canning and Liz Goes, guest Emily Benet, June Armstrong-Wright and myself. During the break we bought books from Carmel of The Big Green Bookshop and the authors obligingly signed our copies. I had a very interesting chat with Rosie Fiore's four year old son, Ted, who popped in during the break with his dad to see how Mum was getting on. He looked a bit surprised when I asked Rosie to write in the book so she explained that while we didn't normally write in books it was alright when you'd written them! Ted looked at me solemnly and warned me that the book didn't have any pictures. I assured him that when I read all the words I would make the pictures up in my head, so that was OK.

Rosie Fiore, an author living in nearby Mill Hill, was the first speaker for the second part of the afternoon, telling us a little about her writing and reading from her book Wonder Women. We particularly appreciated the extract as it was set in Finchley!

Allen Ashley then joined us to facilitate the panel discussion. Our three main speakers were joined by Miriam Halahmy discussing the concept of men writing women and women writing men. This opened in to a more general discussion about how writers were perceived.

Is one a writer or a female writer? Is one a writer or a black writer? How writers are perceived and marketed can be by sex or race or even genre. Rosie Fiore found she has been classified as a chick-lit writer - although she is actually writing about modern women managing families and businesses - but because it is commercial fiction and about women, mainly aimed at women readers, she is by de-fault a chick-lit writer. See Emily Benet's take on this on her blog: Emily Benet

The discussion was opened up to questions and comments from members of the audience and I think it could have gone on for another hour but 6.00pm was approaching so Allen brought the discussion to an end. While Rosie C. thanked our panel, I presented each with a small token of our appreciation along with the same to Robert and Elisabeth Newton and Mike Gee. Many people had contributed to the Finchley Literary Festival but we knew that if we thanked each person who had helped it to be the success it was, we'd be there for a considerable time, which might not have endeared us the staff who had to prepare the room for a wedding the next day.

It had been a hectic but fantastic week and I'm very proud to have been one of the people behind the Finchley Literary Festival.