Owing to work I was sorry to miss FLF2015's first event; Theresa Musgrove's talk on her research of Mary Ann Cotton, a Victorian serial killer, which by all accounts was fascinating. I will have to wait for her book. Hurry up, Theresa.

During the afternoon I transformed from a respectable speech and language therapist, who had spent the morning bringing succour to the afflicted, into one of the afflicted.

Mike Carey's book The Girl With All the Gifts features zombies in Finchley and unfortunately I was affected by the fungal spores that turn nice speech therapists into this.... 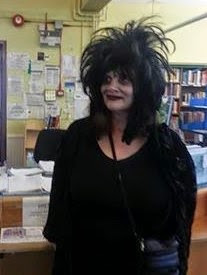 although of course this might just be the effect of working for the NHS for so long.

I wasn't the only zombie as a couple of others were lurking in Friern Barnet Community Library as we welcomed Mike Carey to FLF.

Mike read the first chapter of the novel and then a few of us read a tiny excerpt from his film script of the same, under the name of She Who Brings Gifts, which is currently being shot on location with Glenn Close, Paddy Considine, Gemma Arterton and newcomer Sennia Nanua in the lead role. (I'm not sure we were quite up to their standard but we tried...)

J. P O'Malley then interviewed Mike about the book and the forthcoming film with the ensuing conversation giving us a great deal of insight into Mike's work and science fiction in general.

There was time for questions from the audience and lots of interesting conversation sparked as Mike signed books.

'Wow, this is the first book event I've ever been to. It was great,' enthused one member of the audience. We hope we have converted him.

This looks like a fantastic event, Lindsay. One of my daughters is reading this book at the moment and is enthralled. The film should be amazing too. x

Seems as though parts of the event were slightly hair raising!