First off, were two workshops held in parallel. My workshop 'Voice Skills for Writers' was at North Finchley Library while Katie Alford's 'Populating Fantasy' was at Church End Library. 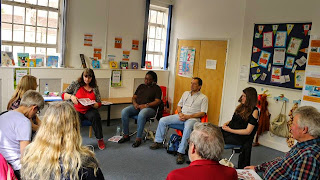 I limited numbers to eight as it is a practical workshop, and was pleased to have full house. Some of the participants already had very good reading styles, but my workshop also included how to look after your voice. Anybody who relies on their voice in their work is a professional voice user (not only singers and actors) and like all tools, the voice needs to be well maintained. Practical exercises were included for keeping a relaxed vocal tract and good breath support.
Murni, our official photographer, popped in to take a few pictures. I forbade her take ones of me demonstrating tongue exercises! Everybody joined in and judging from the feedback it was a positive experience. The feedback gave me ideas for future workshops - perhaps based on a masterclass model.

I then made my way through the drizzle to Waterstones, which was absolutely packed. Rosie and our YA authors had pulled the crowds, and I was sorry not to have been there from the beginning.

Alex Wheatle had read from Liccle Bit, Savita Kalhan from her latest, The Long Weekend and Ellie Daines read from Shine Izzy Shine.

﻿The youngsters were asking plenty of questions and the whole place had a great buzz. There was a competition about favourite characters with lots of giveaways. It was good to see so many young readers who seemed to be enjoying the chance to meet the authors. I know I would have loved that when I was young. Still do!

Alex is a veteran of FLF but Savita and Ellie, both living near Finchley (almost in Finchley) were new to FLF.

After lots of book signing the authors, Rosie and I popped over to Café Buzz for a spot of lunch and were joined by Katie fresh from her workshop. This was the first workshop she had run and she was pleased that it had gone well. It was good to have a bit of time to get to know new faces who I hope will become regular FLF participants. For more details of this event see Rosie's account.


Josie Pearse and Penny Black were already plotting murder in the library. No arrests were made during or after their creative writing workshop as the only weapons allowed were pen, paper and rich imaginations.

It was another event I should have liked to attend but I needed a bit of downtime before heading back to Café Buzz for Anna Meryt's Music and Poetry Palooza. Again we had a packed venue. There was an equipment failure so unfortunately Mike Gee wasn't able to play keyboards, but the other poets and musicians took to the mic (which did work.)

Anna set the tone for the evening and brought poetry alive with her fast paced but excellent delivery.  She was followed by a poet musician Michael Clift and a new local poet Jonathan Young. Another local, Ursula Troche, also read later in the programme.

Shanta Acharya  read a number of poems, but the one that stayed with me was the one about dating agencies as it resonated with the main character in my WIP. The quest for the perfect man is apparently universally impossible. Well I knew that!

Mimi Romilly then entertained us with musical versions of poems written by her grandmother in WW1. Not found until after her death, Mimi has published many of the 800 poems, a number of which were protesting about the war. Mimi's powerful musical adaptions had Café Buzz rocking.

It certainly caused a few passers-by to wonder what was going on in North Finchley.

The penultimate day of FLF drew to a close after its busiest day. Two more events were to come.

Congratulations, Lindsay, on the full house for your workshop and another brilliant day of events. x

Glad you had a full house, Lindsay. Sounds like I missed a good 'un.

I enjoyed it Julia, maybe next time? Thank you Joanna, for all your comments. The whole experience was a good one!